One-way ANOVA is used to test if the means of two or more groups are significantly different.

One-Way ANOVA ("analysis of variance") compares the means of two or more independent groups in order to determine whether there is statistical evidence that the associated population means are significantly different. One-Way ANOVA is a parametric test.

The One-Way ANOVA is often used to analyze data from the following types of studies:

The One-Way ANOVA is commonly used to test the following:

Note: When the normality, homogeneity of variances, or outliers assumptions for One-Way ANOVA are not met, you may want to run the nonparametric Kruskal-Wallis test instead.

The null and alternative hypotheses of one-way ANOVA can be expressed as:

Note: The One-Way ANOVA is considered an omnibus (Latin for “all”) test because the F test indicates whether the model is significant overall—i.e., whether or not there are any significant differences in the means between any of the groups. (Stated another way, this says that at least one of the means is different from the others.) However, it does not indicate which mean is different. Determining which specific pairs of means are significantly different requires either contrasts or post hoc (Latin for “after this”) tests.

SSR = the regression sum of squares

SSE = the error sum of squares

k = the total number of groups (levels of the independent variable)

Then the F statistic itself is computed as

The terms Treatment (or Model) and Error are the terms most commonly used in natural sciences and in traditional experimental design texts. In the social sciences, it is more common to see the terms Between groups instead of "Treatment", and Within groups instead of "Error". The between/within terminology is what SPSS uses in the one-way ANOVA procedure.

Your data should include at least two variables (represented in columns) that will be used in the analysis. The independent variable should be categorical (nominal or ordinal) and include at least two groups, and the dependent variable should be continuous (i.e., interval or ratio). Each row of the dataset should represent a unique subject or experimental unit.

The One-Way ANOVA window opens, where you will specify the variables to be used in the analysis. All of the variables in your dataset appear in the list on the left side. Move variables to the right by selecting them in the list and clicking the blue arrow buttons. You can move a variable(s) to either of two areas: Dependent List or Factor. 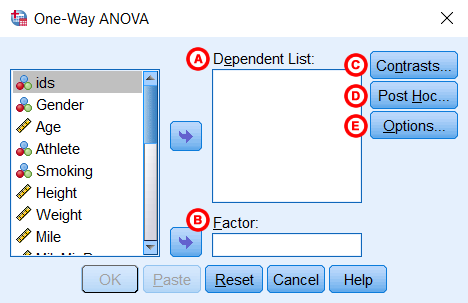 C Contrasts: (Optional) Specify contrasts, or planned comparisons, to be conducted after the overall ANOVA test. 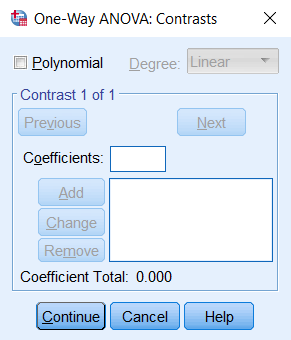 When the initial F test indicates that significant differences exist between group means, contrasts are useful for determining which specific means are significantly different when you have specific hypotheses that you wish to test. Contrasts are decided before analyzing the data (i.e., a priori). Contrasts break down the variance into component parts. They may involve using weights, non-orthogonal comparisons, standard contrasts, and polynomial contrasts (trend analysis).

Many online and print resources detail the distinctions among these options and will help users select appropriate contrasts. For more information about contrasts, you can open the IBM SPSS help manual from within SPSS by clicking the "Help" button at the bottom of the One-Way ANOVA dialog window. 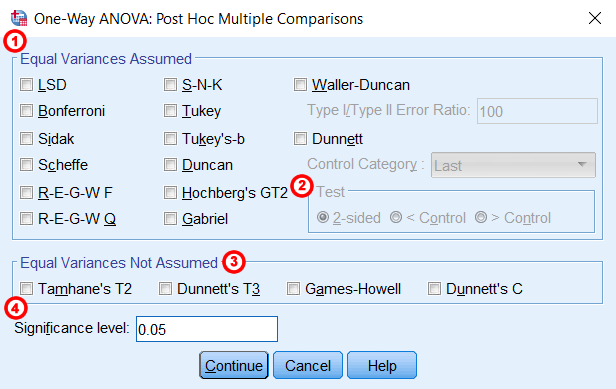 1 Equal Variances Assumed: Multiple comparisons options that assume homogeneity of variance (each group has equal variance). For detailed information about the specific comparison methods, click the Help button in this window.

2 Test: By default, a 2-sided hypothesis test is selected. Alternatively, a directional, one-sided hypothesis test can be specified if you choose to use a Dunnett post hoc test. Click the box next to Dunnett and then specify whether the Control Category is the Last or First group, numerically, of your grouping variable. In the Test area, click either < Control or > Control. The one-tailed options require that you specify whether you predict that the mean for the specified control group will be less than (> Control) or greater than (< Control) another group.

3 Equal Variances Not Assumed: Multiple comparisons options that do not assume equal variances. For detailed information about the specific comparison methods, click the Help button in this window.

When the initial F test indicates that significant differences exist between group means, post hoc tests are useful for determining which specific means are significantly different when you do not have specific hypotheses that you wish to test. Post hoc tests compare each pair of means (like t-tests), but unlike t-tests, they correct the significance estimate to account for the multiple comparisons.

E Options: Clicking Options will produce a window where you can specify which Statistics to include in the output (Descriptive, Fixed and random effects, Homogeneity of variance test, Brown-Forsythe, Welch), whether to include a Means plot, and how the analysis will address Missing Values (i.e., Exclude cases analysis by analysis or Exclude cases listwise). Click Continue when you are finished making specifications. 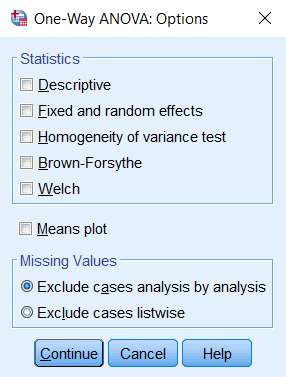 To introduce one-way ANOVA, let's use an example with a relatively obvious conclusion. The goal here is to show the thought process behind a one-way ANOVA.

In the sample dataset, the variable Sprint is the respondent's time (in seconds) to sprint a given distance, and Smoking is an indicator about whether or not the respondent smokes (0 = Nonsmoker, 1 = Past smoker, 2 = Current smoker). Let's use ANOVA to test if there is a statistically significant difference in sprint time with respect to smoking status. Sprint time will serve as the dependent variable, and smoking status will act as the independent variable.

Just like we did with the paired t test and the independent samples t test, we'll want to look at descriptive statistics and graphs to get picture of the data before we run any inferential statistics.

The sprint times are a continuous measure of time to sprint a given distance in seconds. From the Descriptives procedure (Analyze > Descriptive Statistics > Descriptives), we see that the times exhibit a range of 4.5 to 9.6 seconds, with a mean of 6.6 seconds (based on n=374 valid cases). From the Compare Means procedure (Analyze > Compare Means > Means), we see these statistics with respect to the groups of interest:

Notice that, according to the Compare Means procedure, the valid sample size is actually n=353. This is because Compare Means (and additionally, the one-way ANOVA procedure itself) requires there to be nonmissing values for both the sprint time and the smoking indicator.

Lastly, we'll also want to look at a comparative boxplot to get an idea of the distribution of the data with respect to the groups: 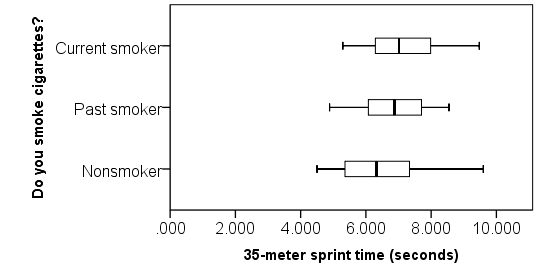 Output for the analysis will display in the Output Viewer window.

After any table output, the Means plot is displayed. 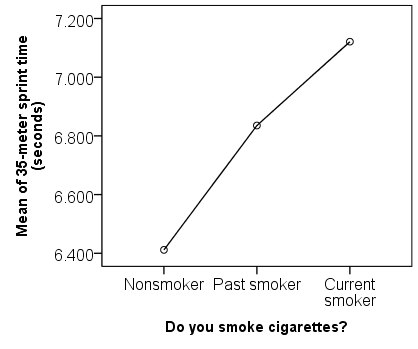 We conclude that the mean sprint time is significantly different for at least one of the smoking groups (F2, 350 = 9.209, p < 0.001). Note that the ANOVA alone does not tell us specifically which means were different from one another. To determine that, we would need to follow up with multiple comparisons (or post-hoc) tests.