This tutorial shows how to compute new variables in SPSS using formulas and built-in functions.

Sometimes you may need to compute a new variable based on existing information (from other variables) in your data. For example, you may want to:

In this tutorial, we'll discuss how to compute variables in SPSS using numeric expressions, built-in functions, and conditional logic.

The Compute Variable window will open where you will specify how to calculate your new variable. 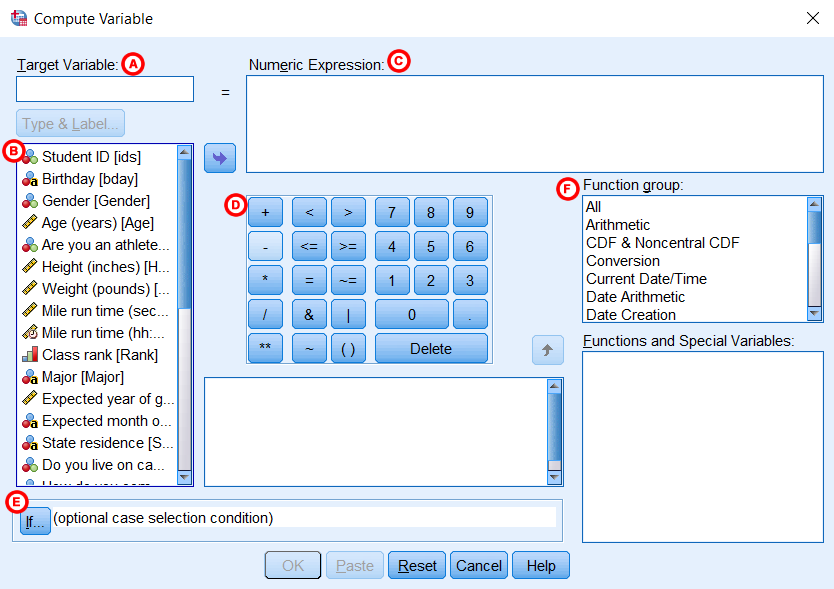 C Numeric Expression: Specify how to compute the new variable by writing a numeric expression. This expression must include one or more variables from your dataset, and can use arithmetic or functions.

When writing an expression in the Compute Variables dialog window:

D The center of the window includes a collection of arithmetic operators, Boolean operators, and numeric characters, which you can use to specify how your new variable will be calculated. There are many kinds of calculations you can specify by selecting a variable (or multiple variables) from the left column, moving them to the center text field, and using the blue buttons to specify values (e.g., “1”) and operations (e.g., +, *, /).

E If: The If option allows you to specify the conditions under which your computation will be applied.

Click If (indicated by letter E in the above image) to open the Compute Variable: If Cases window. 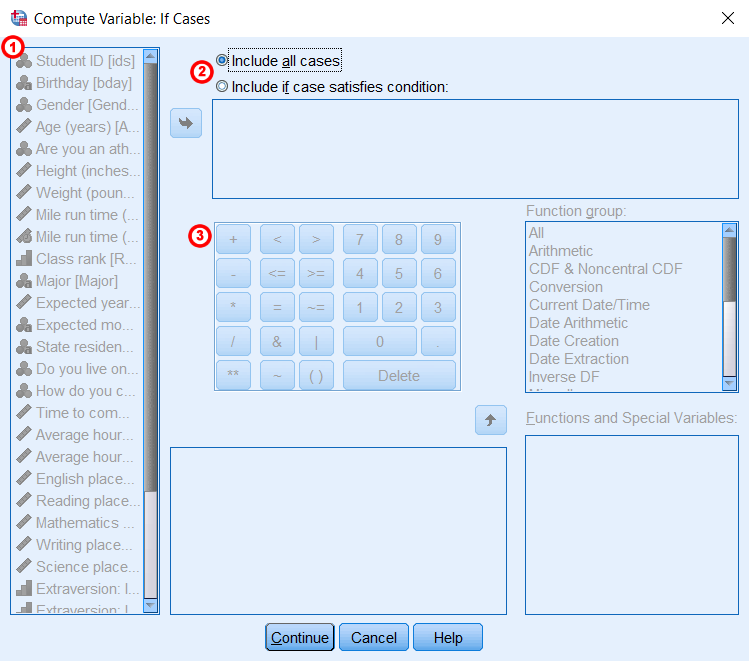 1The left column displays all of the variables in your dataset. You will use one or more variables to define the conditions under which your computation should be applied to the data.

3The center of the dialog box includes a collection of arithmetic operators, Boolean operators, and numeric characters, which you can use to specify the conditions under which your recode will be applied to the data. There are many kinds of conditions you can specify by selecting a variable (or multiple variables) from the left column, moving them to the center text field, and using the blue buttons to specify values (e.g., “1”) and operations (e.g., +, *, /). You can also use the built-in functions in the Function Group list under the right column.

After you are finished defining the conditions under which your computation will be applied to the data, click Continue. Note that when you specify a condition in the Compute Variable: If Cases window, the computation will only be performed on the cases meeting the specified condition. If a case does not meet that condition, it will be assigned a missing value for the new variable.

You do not necessarily need to use the Compute Variables dialog window in order to compute variables or generate syntax. You can write your own syntax expressions to compute variables (and it is often faster and more convenient to do so!) Syntax expressions can be executed by opening a new Syntax file (File > New > Syntax), entering the commands in the Syntax window, and then pressing the Run button.

The general form of the syntax for computing a new (numeric) variable is:

The EXECUTE command on the second line is what actually carries out the computation and adds the variable to the active dataset. (If you have tried to run COMPUTE syntax but do not see variables added to your dataset and do not also see error or warning messages in the Output Viewer, you may have forgotten to run the EXECUTE statement.)

Notice how each line of syntax ends in a period.

On the first line, STRING statement declares the new variable's name ( NewVariableName) and its format (A20) of a new string variable. Note that the format must be put inside parentheses. The format specification for strings will always start with the letter A, followed by a number giving the "width" of the string (the maximum number of characters that variable can contain). In this case, the new variable will have a width of 20, so data values can contain up to 20 characters. When declaring a new string variable, you should take care to set the width of the string to be wide enough so that your data values aren't accidentally cut short. On the second line, the COMPUTE statement gives the actual formula for the variable declared in the STRING statement. On the third line, the EXECUTE command tells SPSS to carry out the computation.

In general, when writing an expression or formula using COMPUTE syntax:

Example: Referring to a Range of Variables in a Function

What if we wanted to refer to the entire range of test score variables, beginning with English and ending with Writing, without having to type out each variable's name?

Listwise exclusion can end up throwing out a lot of data, especially if you are computing a subscale from many variables.

In SPSS, you can modify any function that takes a list of variables as arguments using the .n suffix, where n is an integer indicating how many nonmissing values a given case must have. As long as a case has at least n valid values, the computation will be carried out using just the valid values.

In the previous example, we used the built-in MEAN() function to compute the average of the four placement test scores. If we change the formula for AverageScore3 to MEAN.3(English TO Writing), then any case with three or more nonmissing values will have a successful, nonmissing value for AverageScore3. (Stated another way, a given case could have at most one missing test score and still be OK.)

Alternatively, using the formula MEAN.2(English TO Writing) would require that two or more of the test score variables have valid values (i.e., a given case could have at most two missing test scores).

If you click Paste after revising the formula, the following syntax will be written to the syntax editor window:

A common scenario on health questionnaires is to have multiple questions about risk factors for a certain disease. These questions may originally be coded as 0 (absent) and 1 (present); or 0 (no) and 1 (yes). For example, on a questionnaire about ADHD, we may ask three questions about whether an individual's biological parents or siblings have been diagnosed with ADHD:

Suppose we want to only have a single indicator variable, where 0 = does not have any risk factors, and 1 = has one or more risk factors. The function ANY() is a convenient way to compute this indicator. The ANY function is designed to return the following:

The application we will demonstrate is intended to be used when you want to check for one specific value across many variables.

For this example, we will use this tiny dataset. Each variable represents a "yes/no" question, with 1=No, 2=Yes.

You can copy, paste, and execute the following syntax to generate this dataset in SPSS, or you can download the linked SPSS datafile below.

This syntax (minus the VALUE LABELS line) can be generated automatically by following the dialog window steps above and clicking Paste instead of OK.

Let's check that the ANY() function produced the results that we expected. If you run the above code, you should get results that look like the following:

What does this mean? If we go back to the ADHD example used at the start of this section, it implies that anyone whose mother, father, or biological sibling has been diagnosed with ADHD, is themselves considered to have a risk factor for ADHD. It does not assign "extra risk" if someone has two or more relatives that have been diagnosed.

When working with string variables -- and especially when working with text data that's been manually typed into the computer -- your data values may have variation in capitalization. If you want to use this type of variable in an analysis, you'll have to "standardize" the data values so that they all have the same patterns of capitalization, because SPSS considers each unique capitalization to be a different data value (even if the strings are otherwise identical).

In the sample dataset, the variable Major is a string variable containing open-ended, write-in responses asking for the person's college major. If you create a frequency table of this variable (Analyze > Descriptives > Frequencies), you'll notice that there are many rows of the table, and that some of the rows of the table are identical except for differences in capitalization: 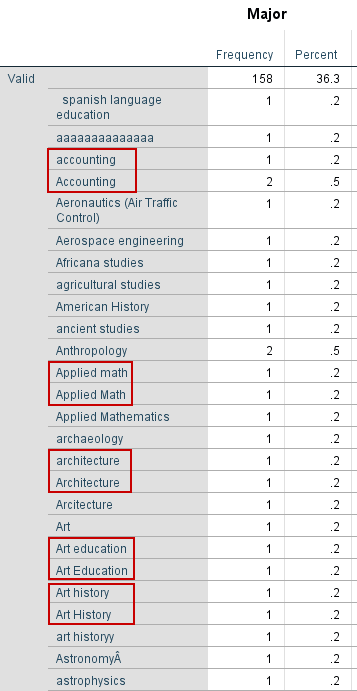 If we want to merge the otherwise-identical categories of "Art History" and "Art history", we'll need to transform this variable so that the characters are all uppercased or all lowercased.

After executing the transformation and rerunning the frequency table on the transformed variable, we should see that the counts and frequencies of the previously duplicated categories are now combined: 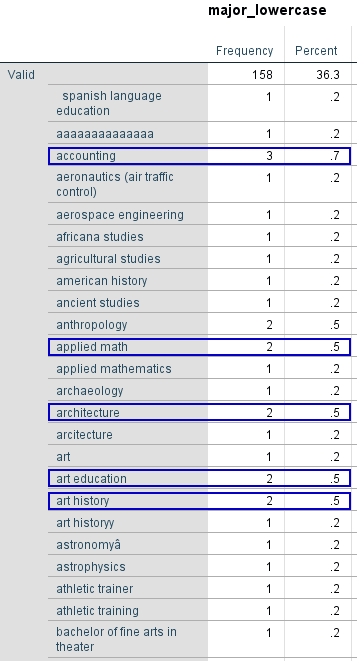 While this variable is still not ready for analysis -- for example, several duplicated categories exist because of misspellings or minor variations in wording -- we have now completed the first step.