In SPSS, the Explore procedure produces univariate descriptive statistics, as well as confidence intervals for the mean, normality tests, and plots. 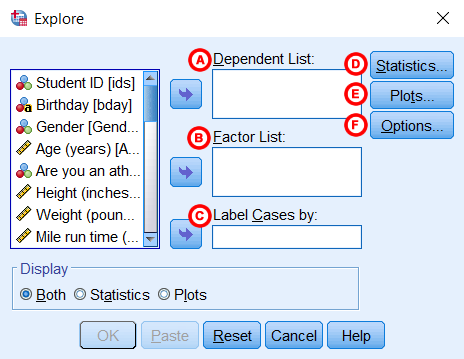 A Dependent List: The continuous numeric variables you wish to analyze.

B Factor List: (Optional) Categorical variables to subset the analysis by. The procedure will produce individual summaries of the numeric variable with respect to each category.

C Label Cases by: (Optional) An ID variable with "names" for each case. These names appear in reports of outliers. If not specified, SPSS will use the row number to label the case.

D Statistics: Optional choices for what statistics to report. Choices are Descriptives (enabled by default), M-estimators, Outliers, and Percentiles. 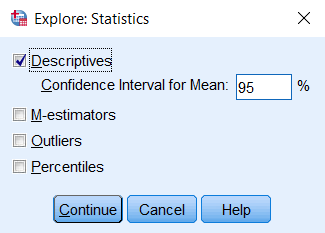 The Descriptives option produces a set list of descriptive statistics: mean, confidence interval for the mean (default 95% CI), 5% trimmed mean, median, variance, standard deviation, minimum, maximum, range, interquartile range (IQR), skewness, kurtosis, and standard errors for the mean, skewness and kurtosis. Note that you can't pick and choose which of these descriptive statistics to view -- it's all of them or none of them.

The M-estimators option produces alternatives to the mean and median. See this page on the official IBM guide for more information.

The Outliers option prints the top five highest and lowest values, and what case they are associated with. (If you have specified a "Label cases by" variable, that variable will print instead of the case number.)

E Plots: Optional choices for which graphs to produce; this is also where the normality test options are. Plot choices include boxplots, stem-and-leaf plots, histograms, and normality plots. By default, the Explore procedure produces boxplots and stem-and-leaf plots for each continuous numeric variable. 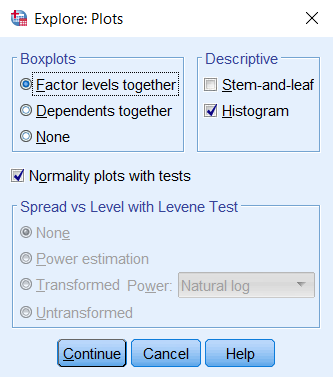 The Normality plots with tests option will produce both the inferential statistical tests of normality and the normality plots. (Note that it is not possible to request just the inferential statistics without the plots, or vice versa). Specifically, it will produce: a Kolmogorov-Smirnov test, a Shapiro-Wilk test, a normal Q-Q plot, and a detrended normal Q-Q plot. (See below for more detailed information about these tests and graphs.)

If a factor variable is specified, you can use the Spread vs Level with Levene Test options to request Levene's test for the homogeneity of variance (i.e., constant variance across factor levels).

F Options: Control how Missing Values should be treated. By default, listwise exclusion is used. 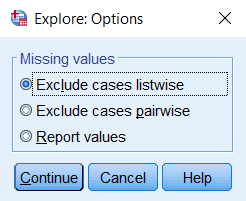 About the Normality plots with tests option

The criteria used to reject or not reject the null hypothesis is the same for both tests:

Note that there are separate p-values for the K-S test versus the Shapiro-Wilk test; they do NOT share the same p-value. In fact, it is possible for these two tests to disagree; that is, one test may indicate non-normality, but the other may not.

In general, you should never rely on the results of these hypothesis tests alone; you should always use other sources (especially graphs) to support or refute a claim of normality. You should also consider your sample size and any scientific background about your problem that is relevant. Keep in mind that the Shapiro-Wilk test is very sensitive to even trivial deviations in normality when the sample size is large. That is, if your sample size is very large, it is quite possible that the Shapiro-Wilk test may come back significant, even if the deviations from normality are very small. 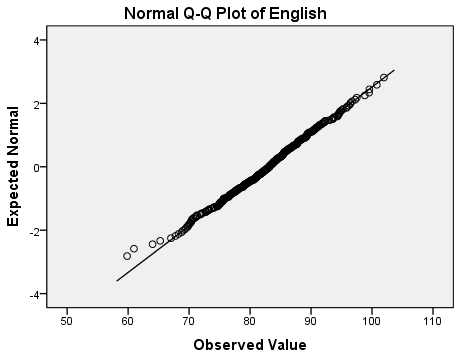 A Normal Q-Q (or Quantile-Quantile) Plot compares the observed quantiles of the data (depicted as dots/circles) with the quantiles that we would expect to see if the data were normally distributed (depicted as a solid line). If the data is approximately normally distributed, the points will be on or close to the line. When looking at a Q-Q plot, you should look for points that stray far from the line of expected values, as well as trends in the observed values. 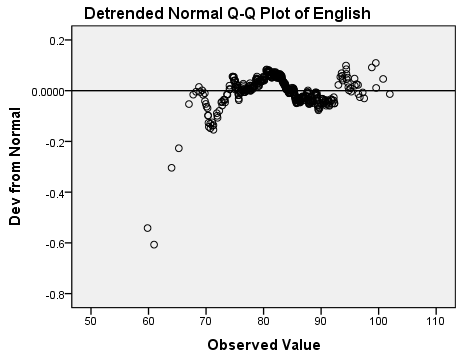 The Detrended Normal Q-Q Plot shows the same information as the Normal Q-Q Plot, but in a different manner. In the Detrended Plot, the horizontal line at the origin represents the quantiles that we would expect to see if the data were normal; the dots represent the magnitude and direction of deviation in the observed quantiles. Each dot is calculated by subtracting the expected quantile from the observed quantile. (This implies that if a dot is below the trend line on the Normal Q-Q plot, it will appear above the trend line on the Detrended Normal Q-Q plot, because observed - expected > 0.)

In addition to hypothesis tests and Q-Q plots, it's a good idea to look at a boxplot and a histogram of your data. Boxplots will give you a better look at outliers and the location of your quantiles; histograms allow you to easily visualize the distribution of your data. Both tools can help you decide if there are departures from normality in your data, and if they are severe enough to warrant concern.

About boxplot types in the Explore procedure

Create separate graphs for each numeric variable's boxplot. This is useful if your numeric variables don't need to be compared to one another, or are measured on different scales. 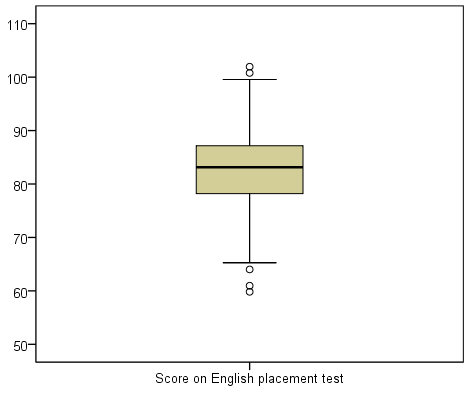 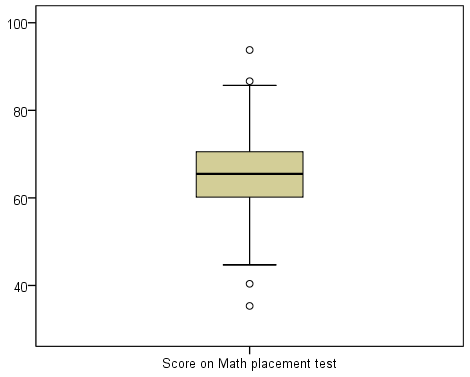 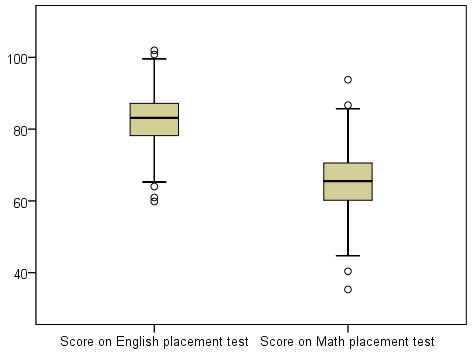 Create separate graphs for each numeric variable; within each graph, there will be a boxplot for each level of the factor. The individual graphs will show the comparative boxplots for each factor level side-by-side. This is useful in ANOVA-type situations where you want to look at differences in a numeric variable with respect to groups. 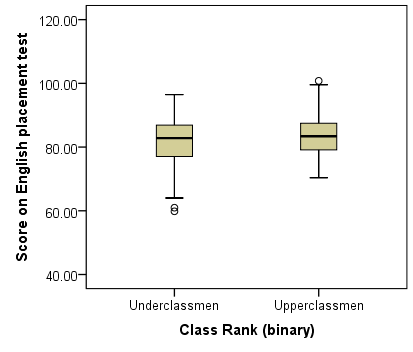 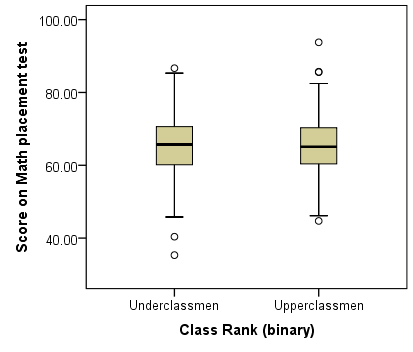 Draw the boxplots on the same graph, and group them by levels of the factor variable. 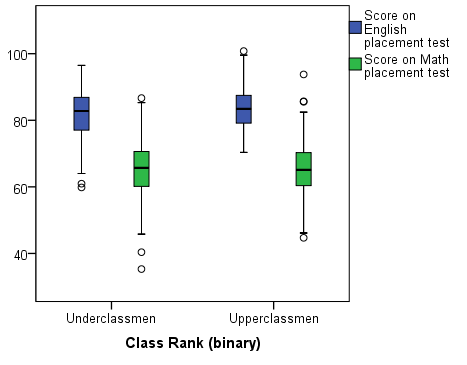 The first table, the Case Processing Summary, shows how many valid values there were. Since we selected pairwise missing data handling, the analysis is using all complete information for each variable. We can see that there are more missing values for variable Weight (59) than there are for variable Height (27).

The Descriptives box appears next. It has detailed univariate descriptive statistics for each of the continuous variables, including skewness and kurtosis. 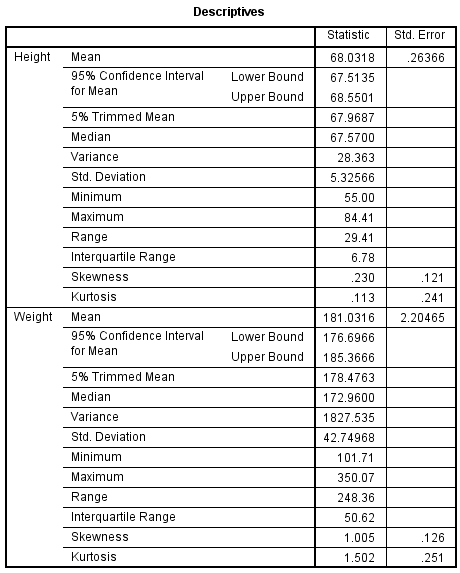 The Tests of Normality table contains the Kolmogorov-Smirnov and Shapiro-Wilk tests for both of our variables.

For weight, the K-S and Shapiro-Wilk test p-values are both very small (p < 0.001), so the decision to reject is very clear. However, for height, the results are not as clear-cut: the K-S p-value is p = 0.049 (which is just barely below the significance level 0.05), and the Shapiro-Wilk p-value is p = 0.070. These tests are suggesting contradictory conclusions: The K-S tests suggests non-normality, but the Shapiro-Wilk test suggests normality. How do we resolve this discrepancy? Let's look at the graph output.

The plots for variable weight make it very clear why the normality tests came back significant:

The boxplot of weight shows that the distribution is skewed right. Signals of this include: 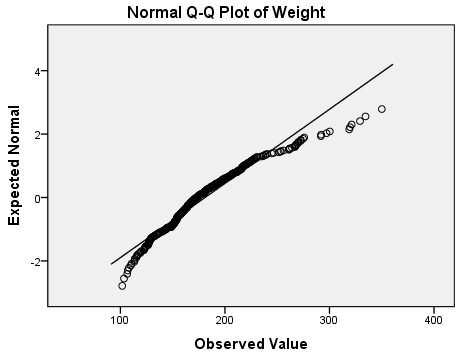 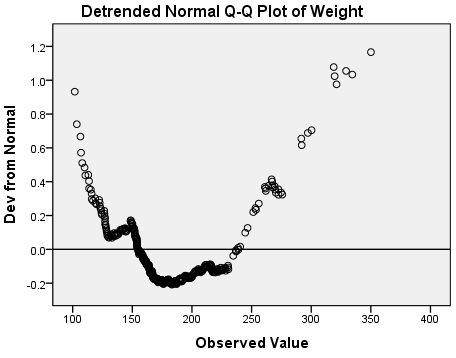 With that in mind, let's evaluate the graphs for variable height:

The right and left tails appear to be about the same length. There are some outliers on the high end, and the median is slightly left of center; however, it's not nearly as severe as it was for the weights. In general, the heights appear to be symmetrically distributed about the center of the distribution. 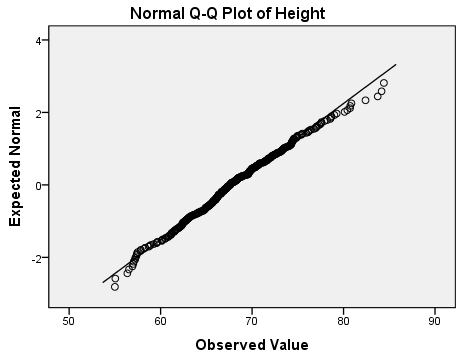 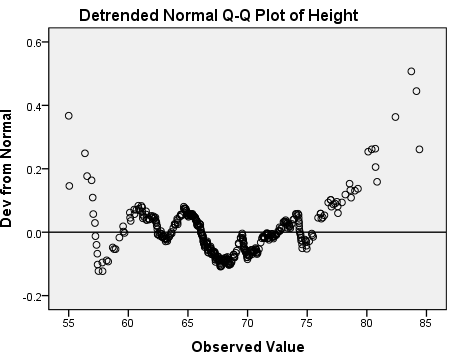 Between the skewness in the boxplot, the strong and systematic deviations in the Q-Q plots, and the two significant normality tests (p < 0.001), we have overwhelming evidence suggesting that variable Weight is not normally distributed.

For variable height, the evidence is much weaker. One test is significant (K-S test p = 0.049); the other is not (Shapiro-Wilk p = 0.070). After looking at the graphs, we see that there are some deviations from normality, but they do not appear to be very large. For practical purposes, then, it is not unreasonable to assume that variable height is normally distributed.

There are several hypothesis tests that can be used to test for normality. However, it is important to not rely on these tests alone: you should always use graphical measures like boxplots, histograms, and P-P plots to corroborate them.