In SPSS, the Descriptives procedure computes a select set of basic descriptive statistics for one or more continuous numeric variables. In all, the statistics it can produce are:

Additionally, the Descriptives procedure can optionally compute Z scores as new variables in your dataset. 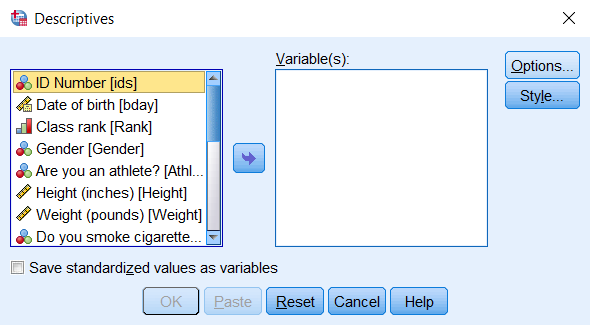 By default, the Descriptives procedure computes the mean, standard deviation, minimum, and maximum of the variable. Clicking Options will allow you to disable any of the aforementioned statistics, or enable sum, variance, range, standard error of the mean (S.E. mean), kurtosis, and skewness. You can also choose how you want the output to be organized: 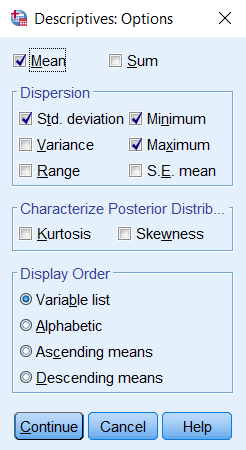 The sample dataset has test scores (out of 100) on four placement tests: English, Reading, Math, and Writing. We want to compare the summary statistics of these four tests so we can determine which tests the students tended to do the best and the worst on.

Here we see a side-by-side comparison of the descriptive statistics for the four numeric variables. This allows us to quickly make the following observations about the data:

In SPSS, you can compute standardized scores for numeric variables automatically using the Descriptives procedure. One important distinction is that the standardized values of the "raw" scores will be centered about their sample means and scaled (divided by) their sample standard deviations; that is:

If the computation is successful, then the syntax will be printed in the Output window, and new variables called ZEnglish, ZReading, ZMath, and ZWriting will be added to the Data View.