This tutorial shows how to use Recode into Different Variables and DO IF syntax to change or merge the categories of string or numeric variables in SPSS.

In SPSS, there are three basic options for recoding variables: 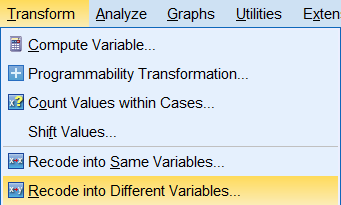 The Recode into Different Variables window will appear. 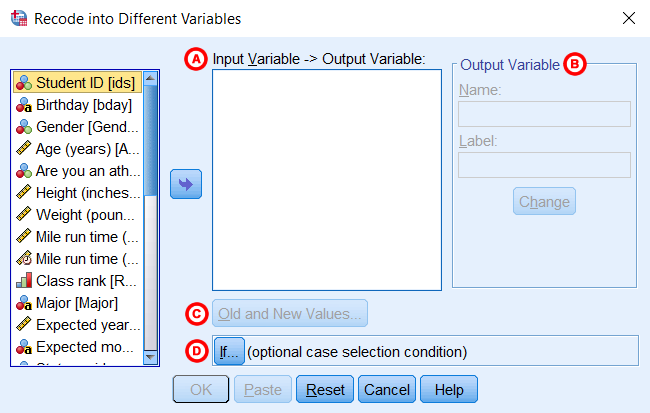 The left column lists all of the variables in your dataset. Select the variable you wish to recode by clicking it. Click the arrow in the center to move the selected variable to the center text box, (B).

A Input Variable -> Output Variable: The center text box lists the variable(s) you have selected to recode, as well as the name your new variable(s) will have after the recode. You will define the new name in (C).

B Output Variable: Define the name and label for your recoded variable(s) by typing them in the text fields. Once you are finished, click Change. Now the center text box, (B), will display both the name of the original variable as well as the name for the new variable (e.g., “Height --> Height_categ”).

D If: The If option allows you to specify the conditions under which your recode will be applied. (We discuss the If option in more detail later in this tutorial.)

Once you click Old and New Values, a new window where you will specify how to transform the values will appear. 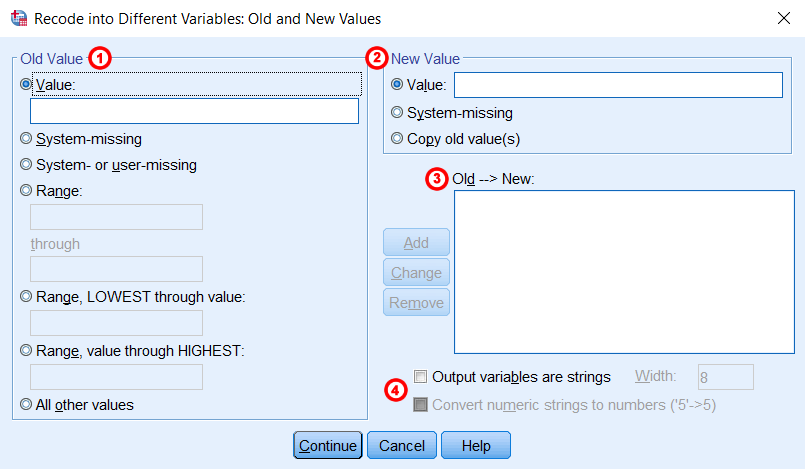 When recoding variables, always handle the missing values first! The most common recoding errors happen when you don't tell SPSS explicitly what to do with missing values: SPSS may recode missing values into one of the new valid categories. This is especially true if using the "Lowest thru", "thru Highest", or "Range - through" options.

2New Value: Specify the new value for your variable (i.e., a specific numeric code such as “2,” system-missing, or copy old values).

3Old -> New: Once you have selected the old and new values for your selected variable in (1) and (2), click Add in area (3), Old-->New. The recode that you have specified now appears in the text field. If you need to change one of the recodes that you have added to the Old-->New area section, simply click on the one you wish to change and make changes in (1) and (2) as necessary.

You will need to repeat these steps for each value that you wish to recode. Once you have specified all the transformations that you wish to make for the selected variable, click the “Continue” button.

4Output variables are strings and Convert numeric strings to numbers: These options change the variable type of the new variable. 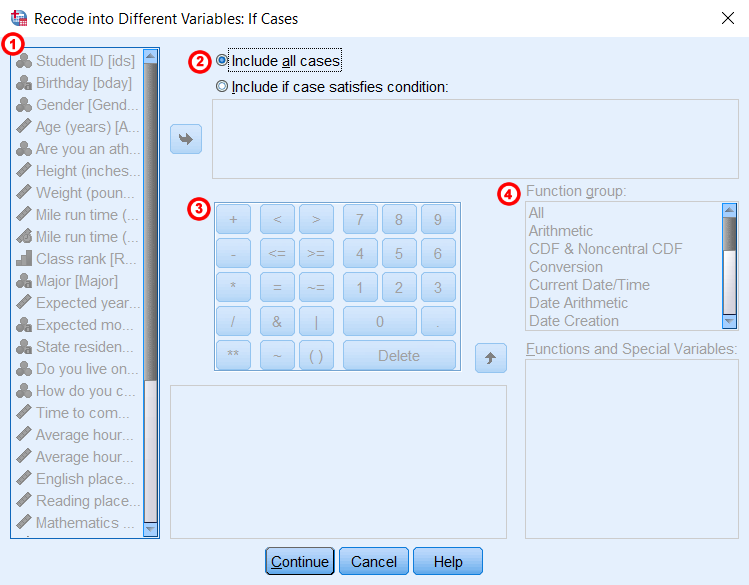 1 The left column displays all of the variables in your dataset. You will use one or more variables to define the conditions under which your recode should be applied to the data.

3 The center of the window includes a collection of arithmetic operators, Boolean operators, and numeric characters, which you can use to specify the conditions under which your recode will be applied to the data. There are many kinds of conditions you can specify by selecting a variable (or multiple variables) from the left column, moving them to the center text field, and using the blue buttons to specify values (e.g., “1”) and operations (e.g., +, *, /). You can also use the options in the Function group list.

4 The Function Group box contains common functions that may be used for calculating values for new variables (e.g., mean, logarithm, sine). After selecting a category, you will see function names appear in the Functions and Special Variables box. Double-clicking on a function name will add it to the "Include if case satisfies condition" box.

When you are finished defining the conditions under which your recode will be applied to the data, click Continue.

Recoding into the same variable (Transform > Recode into Same Variables) works the same way as described above, except for that any changes made will permanently alter the original variable. That is, the original values will be replaced by the recoded values.

In general, it is good practice not to recode into the same variable because it overwrites the original variable. If you ever needed to use the variable in its original form (or wanted to double-check your steps), that information would be lost.

DO IF - ELSE IF Syntax

DO IF-ELSE IF syntax performs similarly to the Recode procedures, but allows for more control over specifying numeric ranges. If you want to discretize a numeric variable into more than three categories, or if you want to perform a recoding based on more than one variable, you'll need to use DO IF-ELSE IF syntax. (You could use DO IF-ELSE IF for recoding a categorical variable, but there's no real reason to use it over Recode; the Recode syntax is shorter and more efficient for that situation.)

The DO IF-ELSE IF syntax is:

The DO IF and ELSE IF lines tell SPSS to perform the nested computation if certain conditions are true. These conditions are statements (or chains of statements) that evaluate as true or false. For example:

A list of operators that SPSS recognizes in conditional (or logical) statements is given in the following table. Note that you can use the letter combinations or the mathematical symbols in your statements. You can also use parentheses to group or distribute the effects of an operator.

The ELSE line tells SPSS to perform its nested computation on all other values not accounted for by the previous conditional statements. ELSE is optional -- you don't necessarily have to use it, but it is often more convenient to use than addressing every possible outcome using ELSE IF. If you do use ELSE, it must be at the very end of the loop (right before the END DO statement).

The COMPUTE statements are where the new variable(s) are actually computed or set. Note that if you want to set a a variable equal to a missing value in a COMPUTE statement, use the syntax var=$SYSMIS. The term $SYSMIS refers to system-missing values. (Note that although SPSS indicates numeric missing values using period characters (.), you would not use the assignment statement var=.; this will return a syntax error.)

You may encounter this syntax error after executing a DO IF block:

If this happens, you may need to add a hyphen (-) before the COMPUTE statement(s).

In the sample dataset, the variable Rank has the categories Freshman (1), Sophomore (2), Junior (3), and Senior (4). Let's use Recode into Different Variables to merge the categories and create a new indicator variable called RankIndicator with the levels Underclassman (1) and Upperclassman (2).

We will show three different ways of defining the categories that produce identical results. You only have to use one of these; we show multiple methods to show that there is flexibility in how you define the groups.

This method tells SPSS exactly how to map each old category onto a new category.

This method uses ranges. Note that this method works OK for integers, but will often yield unexpected results when used on variables that have one or more nonzero decimal places.

In the sample dataset, the variable CommuteTime represents the amount of time (in minutes) it takes the respondent to commute to campus. Let's try recoding this variable into three ordinal groups:

To check your work, go to the Variable View tab in the Data Editor window. Right-click on the new CommuteLength variable and click Descriptives Statistics. This will create a quick frequency table and summary statistics of the new variable. Make sure that the new variable has the same number of missing values as the original variable. You will also want to set the value labels for the new variable before doing any analysis using this variable.

Why didn't we use the "Range" option to specify category 2?

Example: Discretizing a Continuous Variable with DO IF Syntax

Suppose we have test scores as percentages, and want to convert those percentages to a letter grade. A typical grading scheme in the United States is:

Recall that the Range specification in Recode into Different Variables allows us to specify a range of values which includes both endpoints. With that constraint, how would we achieve a grouping that was intended to have an open endpoint? For the "D" and "C" grades, we could try specifying the ranges as [60, 69.9] -> D and [70, 70.9] -> C. This could work if scores were only recorded to one decimal place, but what would happen to a score with two decimal places -- say, 69.99? Imagine a number line:

In that instance, the score 69.99 would fall into a "gap" not covered by any recoding rules. In general, your instructions to SPSS should be specified in such a way that all possible outcomes are accounted for, regardless of whether you're using the menus or syntax.

In the sample dataset, the variable Math represents the subjects' scores (out of 100 points) on a math placement test. Suppose we want to recode these scores to have a letter grade using the scheme described above. Let's use DO IF syntax to perform this recode and save the results as a new variable, MathGrade.

This computation must be done using syntax.

NOTE: This syntax has been tested in SPSS Version 22 and 23. We have found that it may not work properly in SPSS Version 20. If you are using version 20, you may need to put dashes before each COMPUTE statement inside the DO IF block.

If the recode was performed successfully, we should see the new variable in the Data Editor window.

If the new variable appeared but all of the values are missing, then there is something wrong with your code; you may have forgotten an EXECUTE statement.

We should also be able to check our new variable to make sure that it performed as we expected. There should be the same number of missing values that we started with, and each of the original scores should be classified into exactly one of the grade categories. We can check this using the Compare Means via the syntax below, or via the menus (Analyze > Compare Means > Means. The dependent variable is Math, and the layer/ independent variable is MathGrade): 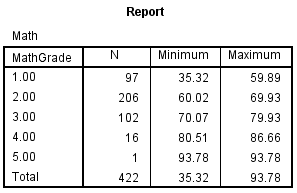 Remember that before you perform any further analysis with this variable, you'll want to add value labels showing 1='F', 2='D', and so on.