When writing down the observed values of a categorical variable, you can choose to write the data values as words or as numeric codes. Either method of recording categorical variables is valid, but it is often easier to work with numeric codes in SPSS than it is to work with strings. This is because, when referring to the content of a string during a computation, the content must match exactly. If the content of the two strings is not an exact match, the computer will not recognize them as identical. This includes placing an extra space at the end of a string: the human eye won't detect the discrepancy, but the computer will. (Note that if your data was originally recorded in Excel, it is very easy for the values of string variables to accidentally be recorded with extra spaces at the end.)

If you have already recorded your categorical variables as strings, you can easily convert them to a labeled, numerically coded variable using the Automatic Recode procedure. This procedure assigns each unique category a numeric code, then saves the converted values as a new variable. It also automatically adds value labels: whatever the string value was before becomes the value label.

Additionally, if you have used blanks to indicate missing values for string variables, you may have noticed that SPSS doesn't automatically recognize those observations as missing. This is because SPSS, by default, recognizes "blank" strings as valid values. In this situation, you must use Automatic Recode in order for SPSS to recognize blank strings as missing values. Otherwise, SPSS will consider the "blank" category as a valid category.

Note: Before using this procedure, you should resolve any issues with "mismatched" category strings. For example, if there are different capitalizations of the same word, you should "normalize" them to all use the same capitalization before you enter the variable into Automatic Recode. Functions like UPCASE() and LOWCASE() can perform these transformations (see the Compute Variables tutorial).  A frequency table will help determine which categories, if any, are mismatched. 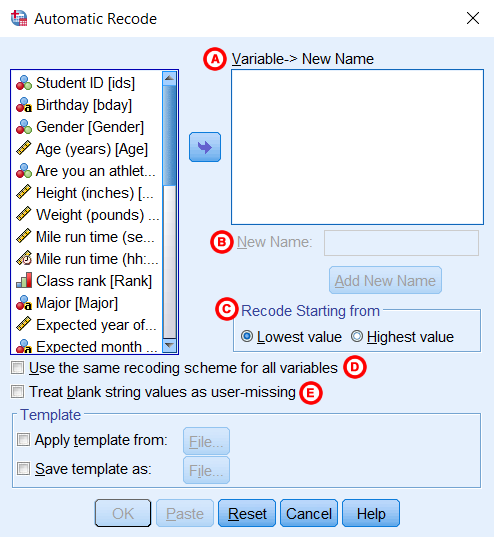 A Variable -> New Name: The original variable(s) being transformed, and the name of the new variable(s) that the results will be saved as.

B New Name field and Add New Name button: These fields will activate after at least one variable has been added to the Variable -> New Name box. You will need to supply a new variable name and click Add New Name for each variable being recoded.

D Use the same recoding scheme for all variables: When checked, the same numeric code is never re-used across variables, unless the category names are identical.

E Treat blank string values as user-missing: When checked, the numeric category assigned to blank strings will be set as a special missing value. This setting must be checked in order for missing values to be properly recognized.

In the sample data file, the variable State is a string variable representing whether the student is an in-state student or an out-of-state student. If you create a frequency table of this variable (Analyze > Descriptive Statistics > Frequencies), you will notice something strange: 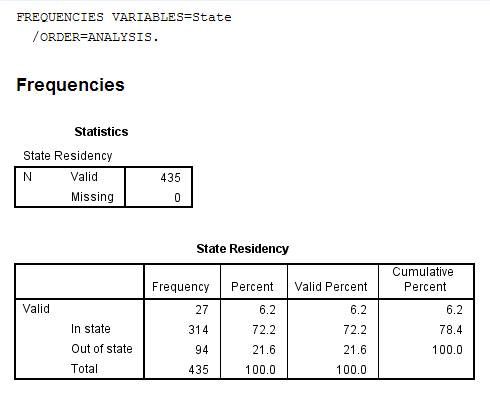 In order for our analyses to be accurate, we'll need to fix this issue. 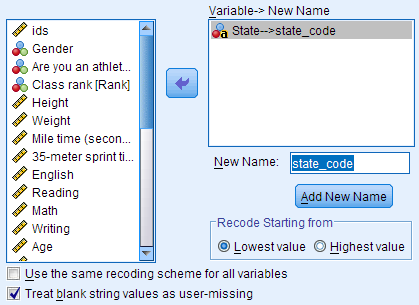 Running the procedure will produce the following message in the Output Viewer window:

This message tells us the mapping scheme that SPSS generated for the categories: "In state" became 1, "Out of state" became 2, and blanks became 3, which was set as a special missing value code. You can confirm In the Variable View window, you can see that in addition to copying the original string values to the category labels, SPSS also defined category 3 as "missing."

Now when we create a frequency table for the recoded variable, it should reflect the proportion of values that are missing: 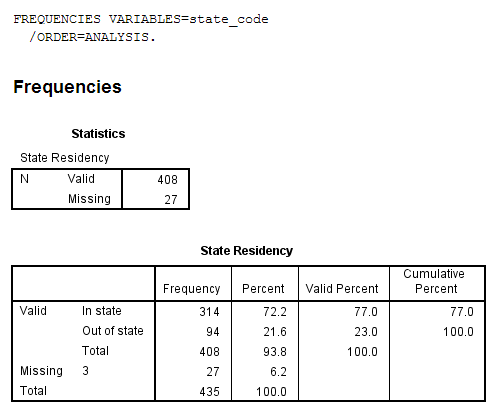 In the output, the recoded blank values are correctly counted as missing, but show their assigned numeric code in the Value Labels column in the output. You can improve the appearance of the missing value category by simply adding a value label (e.g. "Missing") for that particular code.

What if I use Automatic Recode when I've already defined special missing value strings?

If you recorded the missing values for a string variable using some kind of non-blank indicator (for example, 999 or -999) and have already defined that user-missing value in the Variable View window, Automatic Recode will preserve the 'missing' designation, but will still convert the category code to be in the range of the other categories.

Suppose that the below syntax was applied to a string variable with the valid categories "blue", "green", and "red", with missing values recorded using the code "999".

Running that syntax will produce the following output:

Here, you can see that observations originally coded as "999" have been recoded to the numeric indicator 4 with the value label "999". The letter M indicates that the label or code is a missing value indicator.

When would I use the same recoding scheme for all variables?

We have not yet discussed the option Use the same recoding scheme for all variables. What are some reasons to use this option?

Here is a simple example of using the same recoding scheme for all variables. 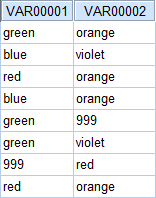 Notice that both VAR00001 and VAR00002 have a category called "red". Since both variables represent colors, it makes sense to use a single coding scheme for all of the possible color categories (i.e., the category "red" will be represented by the numeric code 4 for both variables, rather than having a different code in VAR00001 versus VAR00002). Executing the recoding syntax produces the following output:

As you can see from the syntax, SPSS first alphabetizes all possible unique nonmissing category values across the two variables, then assigns numeric codes to each category. Notice that the "missing" category ("999") was recoded last, even though it is alphabetically before the category names.