Paired t tests are used to test if the means of two paired measurements, such as pretest/posttest scores, are significantly different.

The Paired Samples t Test compares the means of two measurements taken from the same individual, object, or related units. These "paired" measurements can represent things like:

The purpose of the test is to determine whether there is statistical evidence that the mean difference between paired observations is significantly different from zero. The Paired Samples t Test is a parametric test.

The variable used in this test is known as:

The Paired Samples t Test is commonly used to test the following:

Note: The Paired Samples t Test can only compare the means for two (and only two) related (paired) units on a continuous outcome that is normally distributed. The Paired Samples t Test is not appropriate for analyses involving the following: 1) unpaired data; 2) comparisons between more than two units/groups; 3) a continuous outcome that is not normally distributed; and 4) an ordinal/ranked outcome.

Note: When testing assumptions related to normality and outliers, you must use a variable that represents the difference between the paired values - not the original variables themselves.

Note: When one or more of the assumptions for the Paired Samples t Test are not met, you may want to run the nonparametric Wilcoxon Signed-Ranks Test instead.

The hypotheses can be expressed in two different ways that express the same idea and are mathematically equivalent:

The test statistic for the Paired Samples t Test, denoted t, follows the same formula as the one sample t test.

Your data should include two continuous numeric variables (represented in columns) that will be used in the analysis. The two variables should represent the paired variables for each subject (row). If your data are arranged differently (e.g., cases represent repeated units/subjects), simply restructure the data to reflect this format. 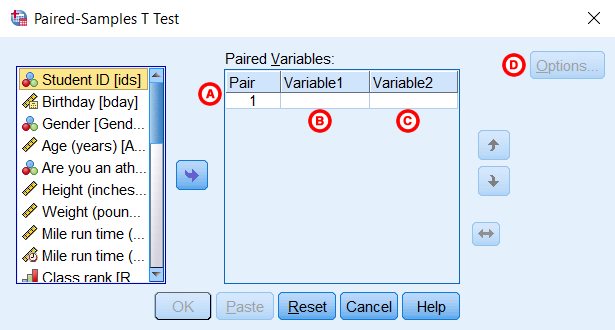 B Variable1: The first variable, representing the first group of matched values. Move the variable that represents the first group to the right where it will be listed beneath the “Variable1” column.

D Options: Clicking Options will open a window where you can specify the Confidence Interval Percentage and how the analysis will address Missing Values (i.e., Exclude cases analysis by analysis or Exclude cases listwise). Click Continue when you are finished making specifications. 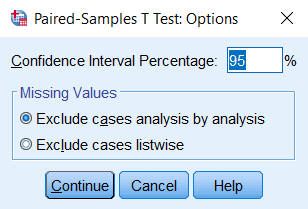 The sample dataset has placement test scores (out of 100 points) for four subject areas: English, Reading, Math, and Writing. Students in the sample completed all 4 placement tests when they enrolled in the university. Suppose we are particularly interested in the English and Math sections, and want to determine whether students tended to score higher on their English or Math test, on average. We could use a paired t test to test if there was a significant difference in the average of the two tests.

Let's create a comparative boxplot of these variables to help visualize these numbers. Click Analyze > Descriptive Statistics > Explore. Add English and Math to the Dependents box; then, change the Display option to Plots. We'll also need to tell SPSS to put these two variables on the same chart. Click the Plots button, and in the Boxplots area, change the selection to Dependents Together. You can also uncheck Stem-and-leaf. Click Continue. Then click OK to run the procedure. 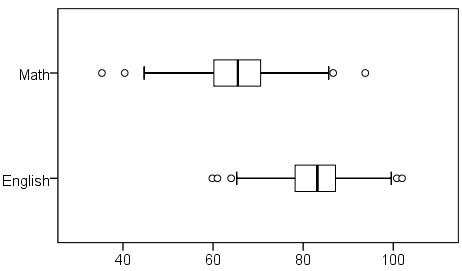 The Paired Samples Statistics output repeats what we examined before we ran the test. The Paired Samples Correlation table adds the information that English and Math scores are significantly positively correlated (r = .243).

Reading from left to right:

From the results, we can say that: