If you want to work with your own data in SAS OnDemand for Academics, you'll first need to upload it to your account. This tutorial shows how to upload and import SAS and non-SAS data files (such as Excel and CSV) into SAS ODA for analysis.

How to Get Your Own Data into SAS OnDemand for Academics

When starting a data analysis project in SAS OnDemand for Academics, your data files may or may not be in the SAS data file format (*.sas7bdat). Your data might be an Excel spreadsheet, an SPSS dataset, or a text or CSV file.

In this tutorial, we'll cover how to get data files from your computer into your SAS OnDemand for Academics account so that you can analyze them.

Uploading Data Files to Your SAS OnDemand for Academics Account

To upload a file to SAS ODA:

At this stage, if you have uploaded a SAS dataset file (*.sas7bdat) and have already mapped a library to the folder where the data file is located, you can skip the next part of the tutorial and start working with the data right away! However, if you have uploaded a text, CSV, Excel, SPSS, or other non-SAS format, you'll need to proceed to the next step: importing your uploaded data.

If you have SAS code files (*.sas) on your computer that you want to use in SAS OnDemand for Academics, you can upload them to your account using these same steps. After uploading *.sas files to your account, you can open and edit them just like a SAS script created directly in ODA.

After your datafiles have been uploaded to your SAS OnDemand for Academics account, you can import the data into a SAS data step. The easiest way to do so is to use the Import Data task:

Let's take a closer look at the syntax that SAS generates when using the Import tool and understand what each line is doing: 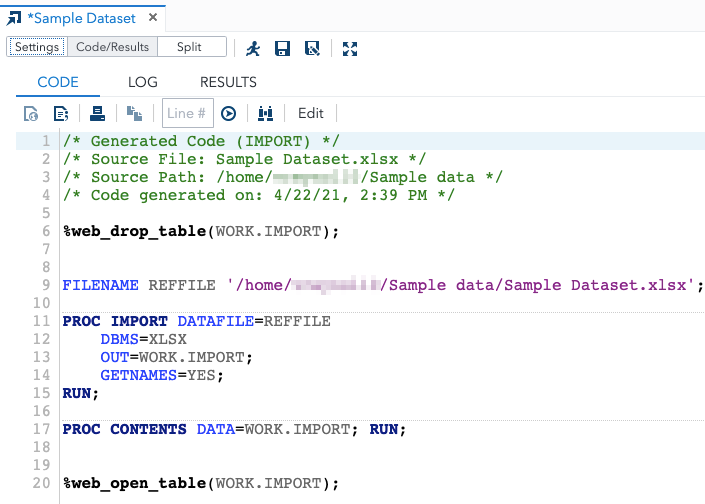 The first four lines are comments -- they do not contain executable code, and exist only as notes for human readers. The notes contain the name and location of the imported file, and the date that the import code was generated.

The first executable line of code is

This particular command "clears out" any data in the system saved under the WORK.IMPORT name. You might notice that this command looks very different than the PROC IMPORT and PROC CONTENTS commands. Notice the percent symbol (%) at the start of the line: this tells us that %web_drop_table is a user-defined macro command. In this case, it's a function that SAS themselves defined to quickly delete a particular dataset. If you've imported another dataset into SAS using the Import task under the name WORK.IMPORT and want to keep it, make sure you save it under a name other than WORK.IMPORT, or else you will lose it!

The first pertinent line starts with the FILENAME statement, which specifies the path to the file containing the data to import. In particular, it assigns the nickname REFFILE to the full file path where our data is located. This means that we can simply type the nickname REFFILE in the PROC IMPORT step instead of having to write out the full file path. 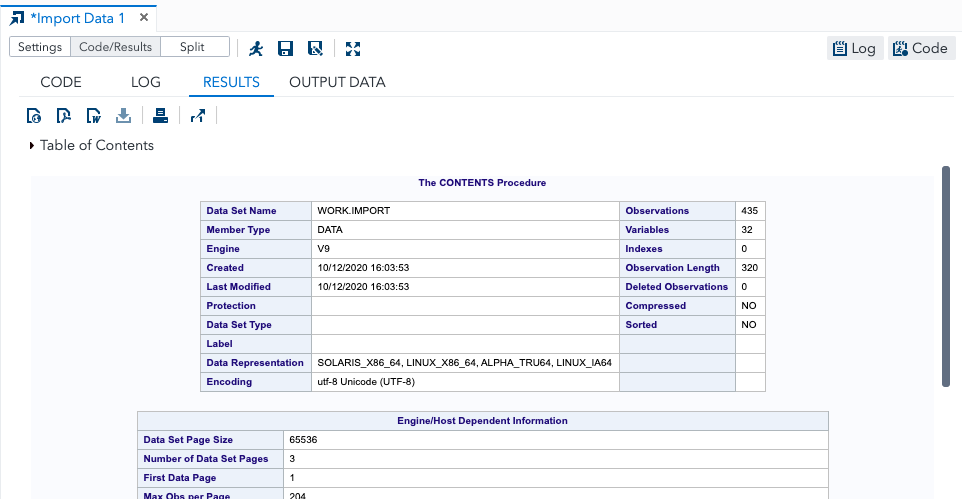 PROC CONTENTS is a standard SAS procedure; for more information about how to use and understand it, see the Summarizing Dataset Contents with PROC CONTENTS tutorial.

Data saved in Excel or *.csv formats should work with the Import Wizard's default choices, but data saved in *.txt format with a special character separator requires a bit of extra work. The process starts the same, but if your data is saved as a .txt file,  SAS requires you to explicitly say you're importing delimited data, and specify what character is used as the delimiter.

"Delimiters" are the character used to separate columns (i.e., variables) in the data file. In a CSV file, the delimiter is a comma; other common delimiters include tabs and spaces, but any character could be used. (The only way to know what character is used as the delimiter in a given *.txt file is to look at the data's accompanying documentation (if available), or look at the data file itself using a text editor.)

To import delimited data in a *.txt file, take the following steps:

For tab-delimited data where the first line contains variable names and data begins on line 2, your inputs should look like the following: 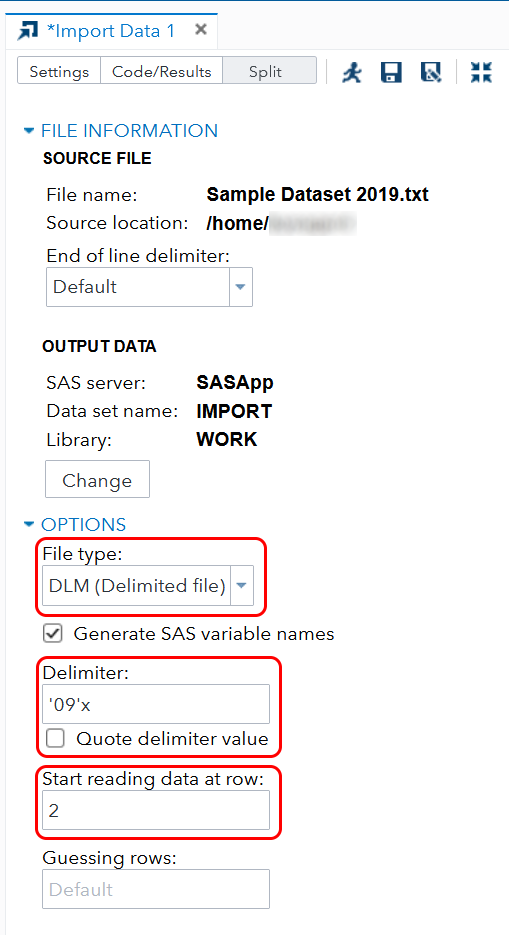 If you used the above setup, your generated import syntax should look like this: 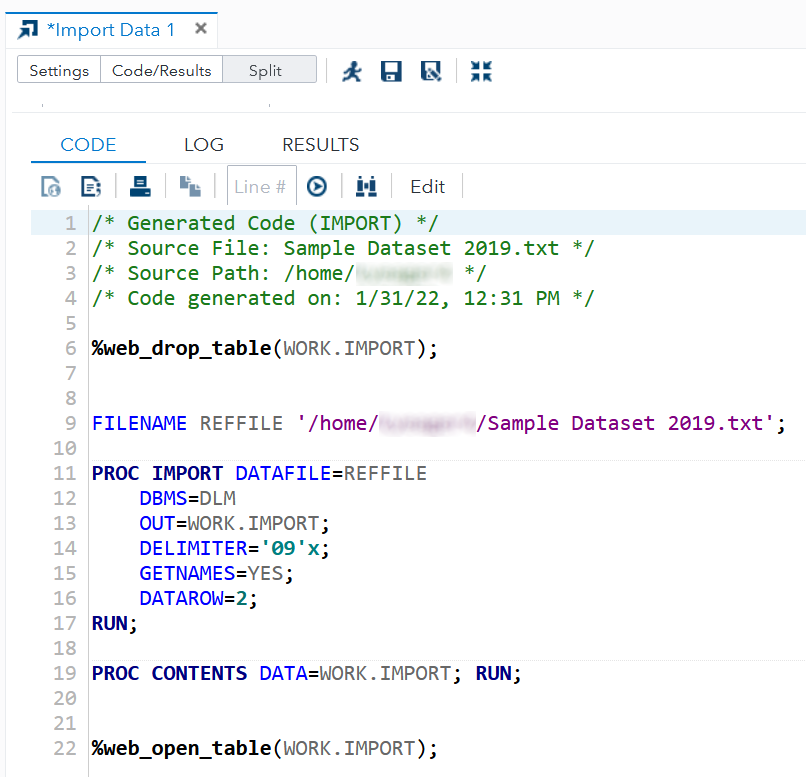 The import syntax generated for delimited data is very similar to the syntax generated for Excel files described earlier, but there are several notable differences. For the Excel file, PROC IMPORT syntax contained four special parameters: DATAFILE, DBMS, OUT, and GETNAMES. The generated PROC IMPORT syntax for delimited files has these same four parameters, plus two new ones:DELIMITER and DATAROW. Let's go over each one: