In SAS, the FREQ procedure can be used to analyze and summarize one or more categorical variables. In this tutorial, we focus on creating simple univariate frequency tables using PROC FREQ.

The basic syntax of the FREQ procedure is:

In the first line, PROC FREQ tells SAS to execute the FREQ procedure on the dataset given in the DATA= argument. If desired, additional options you can include on this line are:

On the next line, the TABLES statement is where you put the names of the variables you want to produce a frequency table for. (Note that SAS will recognize both TABLE and TABLES.) You can list as many variables as you want, with each variable separated by a space. If the TABLES statement is not included, then SAS will generate a table for every variable in the dataset. This is all that is required to produce basic frequency tables, but there are many useful analysis enhancements that can be added on this line after a slash (/) character:

Sometimes, your dataset may contain a “count” variable. In this case, the WEIGHT statement specifies which variable acts as the frequency variable. This statement would be given after the TABLES statement.

Create frequency tables for the variables State and Rank. 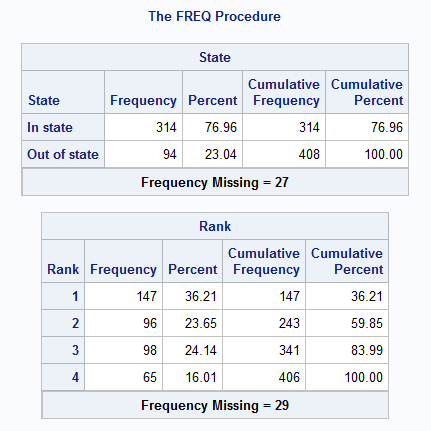 To do this, we add the NLEVELS option to the PROC FREQ statement.

Adding the NLEVELS option to our syntax will add one new table to the output, right at the beginning: 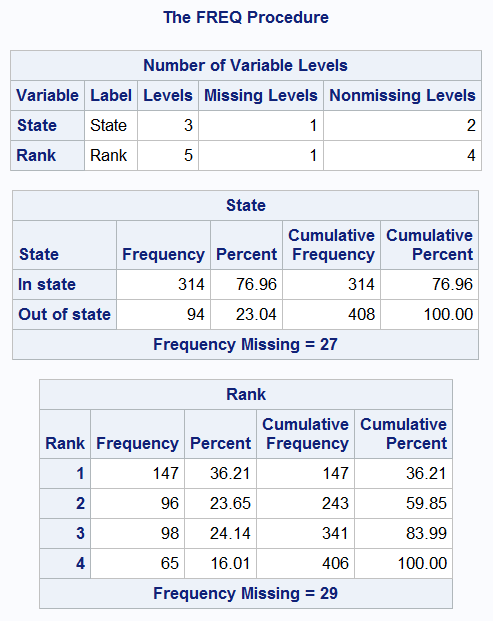 The ORDER=freq option in the first line of the syntax tells SAS to order the values in the table in descending order. 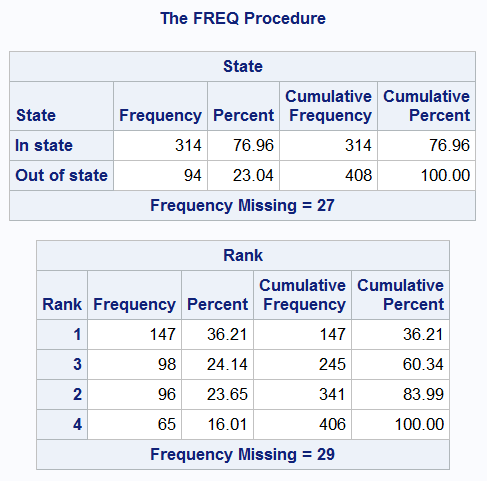 Example 3: Including Missing Values as a Category

To do this, we can add the MISSING option to the TABLE statement:

The MISSING option appearing after the slash (/) in the TABLE statement tells SAS to include the missing values as a row in the table. 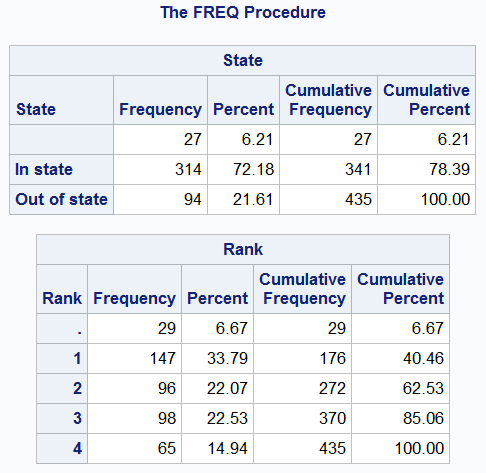 If we compare the proportions in this table to the ones in the previous examples, we can see that the proportions have changed. It is also easier to see that approximately 6% of the responses are missing for both State and Rank (before, we only saw the number of missing responses for those variables).

Note: If you specify ORDER=FREQ in the PROC FREQ statement and include the MISSING option in the TABLES statement, the missing values will always appear as the first row of the table, even if they aren't the most frequently occurring category. The ORDER option will affect the ordering of the nonmissing categories that appear after the missing category.