Change the coding of responses of multiple choice items on a Qualtrics survey.

When you create a multiple choice question on a Qualtrics survey, Qualtrics automatically assigns a numeric code to each answer. When your survey data is exported to Excel or SPSS, those numeric codes appear in the dataset as "shorthand", and the text of the responses are used as value labels. This has the benefit of simplifying data analysis, especially if your items' responses are ordinal.

There are several things to keep in mind when creating multiple choice items in Qualtrics:

A reader asked: How can I apply the information in this tutorial to the Slider question type in Qualtrics?

As of this writing (May 2022), Qualtrics's Slider question type does not include the same type of recode functionality that Multiple Choice questions have. Part of this has to do with the design philosophy of the Slider question type: while it can be made to capture ordinal-scaled answers, it is generally intended to be used to capture "true" numeric data (i.e., interval- or ratio-scale measurements). By contrast, Multiple Choice questions are generally intended to be used with nominal- or ordinal-scaled answers.

If reverse-coding is desired for Slider questions, it must be applied using alternative means, such as using embedded data variables in the Survey Flow to compute a new variable using a formula, or performing the calculation in a statistical software after data collection.

What is Reverse Coding?

One common validation technique for survey items is to rephrase a "positive" item in a "negative" way. When done properly, this can be used to check if respondents are giving consistent answers.

The need for an item to be reverse-coded is specific to the instrument and the factor of interest: in particular, what "high" and "low" scores on the instrument are intended to convey.

Qualtrics automatically assigns numeric codes for each multiple choice item you create, but it's possible to modify those codes manually.

As of May 2021, the new survey editor interface includes a new option to automatically update the item codes for all questions on the survey. This tool is especially helpful if your process of setting up your survey resulted in "messy", non-sequential item codes!

To update the item codes for all questions on the survey, click Tools > Reset Recode Values: 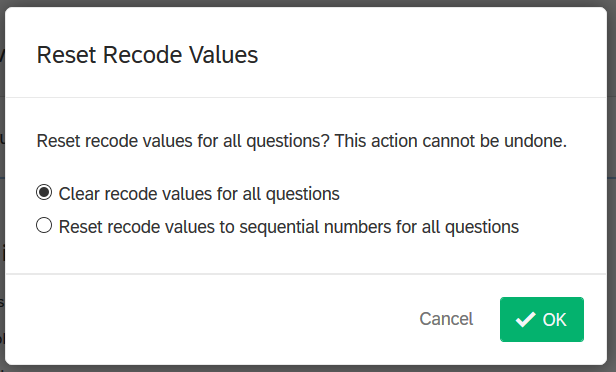 The Reset Recode Values window will appear. There are two choices: 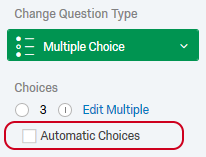 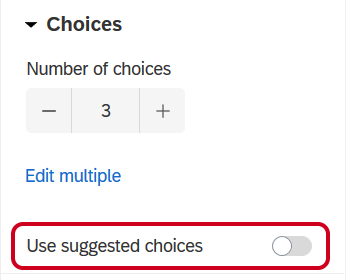 When you have enabled "automatic choices"/"suggested choices" option, the Reverse Order option will be available to reverse-order the items. This means that the responses will be listed from "negative" to "positive". This will also change the coding order, so that the "negative" answers are coded using smaller numbers, and the "positive" answers are coded using large numbers. This is what the built-in Disagree - Agree scale looks like after turning on the Reverse Order option:

To reverse the display order for a Likert item:

Check the Automatic Choices check box, then check the Reverse Order check box at the top of the list. You can then select any of the pre-made scale options, and reverse coding will automatically be applied.

In the Edit Question menu, locate the Choices section. After enabling Use suggested choices, check the Reverse order check box. 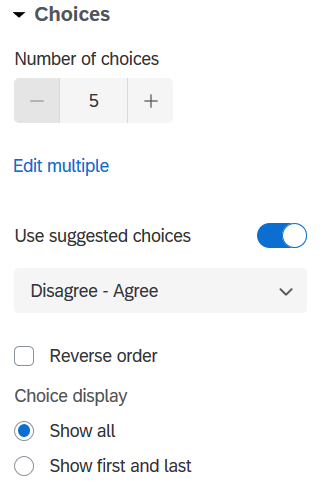 Note that using this method to reverse-code items changes both the display order and the coding of the response options. This means that if you have a mixture of reverse-coded and non-reverse coded items, using this method to reverse-code your items will mean that some items have the negative choices presented first, while other items will have the positive choices presented first. This inconsistency may confuse respondents. For this reason, we do not recommend using Reverse Order to implement reverse coding unless it will be applied to every Likert item on the survey.

As of May 2021, the new survey editor interface includes new options for suggested choices (formerly "automatic choices"): Show All and Show First and Last.

For example, here's what the built-in Disagree-Agree scale looks like with Show All:

Here's what the built-in Disagree-Agree scale looks like with Show First and Last:

Only the first and last scale points have text labels attached; all points in between are unlabeled.

These differences in labeling can have an effect on how respondents answer the questions. If you are implementing an existing, validated survey instrument in Qualtrics, you should follow the text labeling protocol that was used when the instrument was validated. For example, only use the Show First and Last option if the original, validated instrument used that labeling.