3D pen tools at the SMS 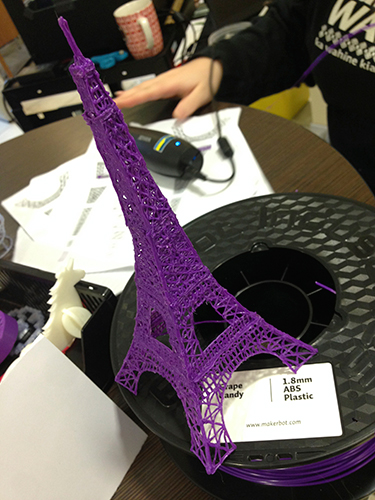 The SMS has several 3D printing pen tools available for use in the studio. The concept of a 3D pen is similar to a glue gun in that material is loaded into it and, once melted, it is extruded and manually applied. 3D pen tools have been promoted as a great way to draw freehand, as well as trace designs in 3D. Our favorite example of tracing so far is the Eiffel Tower project. Using a template design from the 3Doodler website, our student traced the tower outline with the pen, then assembled and fused the model together using the pen and filament.

The pens are a compliment to our 3D printing service and can be used to repair or embellish upon 3D printed models. Our pens use the same filament as our Makerbot Replicator 2x printer so we are able to color match and, depending on the model, produce seamless repairs.

Our 3D pens are freely available for use by Kent State students. See our "Policies" section below for more information. 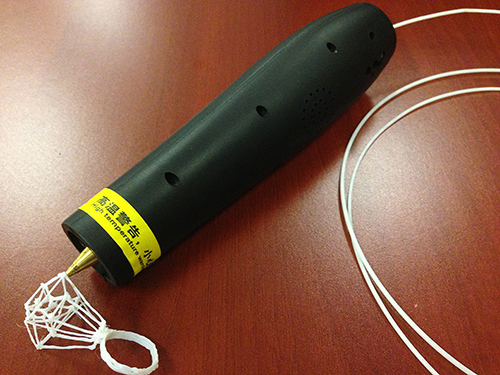 A 3D pen is like a handheld 3D printer but there is no program necessary – just your imagination and a little practice.

How does it work?

Just like the 3D printer it pulls in the plastic filament, heats it up and extrudes it out like a hot glue gun. The plastic cools rapidly which allows you to build forms. Depending on the device, it may either use ABS, PLA or both.

What can you do with it?

Unlike a 3D printer that can cost in the thousands of dollars, a pen is only about $100.

Is the material expensive?

Some 3D pen tools such as the 3Doodler will only work with their proprietary material, which can be expensive. The pens in the SMS, along with many other pen tools, can use either ABS or PLA filament that works with our 3D printers.  The ABS filament can range from about $40 for standard colors to $130 for specialized materials like glow-in-the-dark. Filament is sold in 750g-1kg spools (which goes a LONG way!)

Before your first project 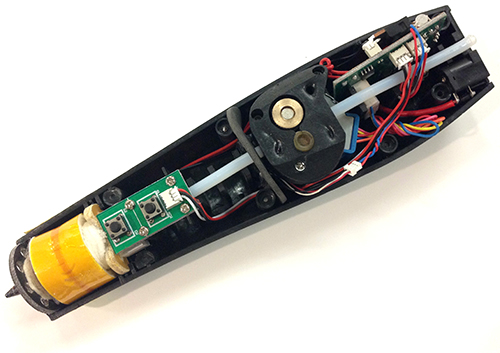 You will be asked to first sign the SMS Liability Waiver (which can be done in advance of your arrival.) An SMS consultant will take you through a brief training session in order to learn the ins and outs of the 3D pen tools. Once we feel that you show a reasonable proficiency with the tool you will be permitted to use the pen on your own project. You only need to complete training once before having access to the pens. The 3D pens are available at all hours that the SMS is open, however training is at the discretion of the SMS staff - as availability allows. To plan ahead we encourage you to contact us at KentStateSMS@gmail.com to set up a training appointment!

Working on your own project

Stop in to use the pen during our regular SMS hours. While we do not currently require users to reserve a pen in advance it is advisable to call or email ahead of your arrival to make sure that a pen is available. Due to the quirks of the pen tools and potential for injury (hot nozzle tip) we prefer that a consultant work alongside you. The pens sometimes need tinkering in order for them to work properly. We hope to eventually have this process streamlined soon (and more quirks worked out on the pens!). Thanks for your patience as we make adjustments along the way!

As we are in the pilot phase of offering use of the 3D pen tools, our policies and procedures will be subject to change. Your use of the tools will help us further develop the service. Thanks in advance for your patience and understanding!

Please note that we reserve the right to decline use of the 3D pens for any reason.

If you have any questions about our 3D pen tools or 3D printing in general, contact us at 330.672.0221 or KentStateSMS@gmail.com. You are also welcome to visit us in person at the Student Multimedia Studio, located on the first floor of the University Library.