Preparing for a formal interview

Camera & guest placement and shot composition for a formal interview:

Note to camera person: Don't be afraid to ask the interviewer and interviewee to wait a second when adjusting the framing of a shot or changing shots. Let them know when you're ready to record and when you are recording. Wait about 5 seconds AFTER you start recording to cue the interviewer that it's ok to start. 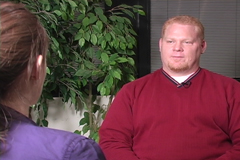 Beginning shot: composition of guest for interview: over the shoulder (OS) shot

This shot is wide enough to include part of the head and shoulders of the person doing the interview. It helps establish the relative position of the interviewer and guest being interviewed.

This shot isn't always necessary but is useful if you are going to have "reverse" angle shots of the interviewer asking questions or reacting to something the guest is saying, like nodding in agreement as the guest talks. You could also pan just a bit right to eliminate the interviewer from this shot leaving you with just a medium shot of the guest.

This shot positions the eyes of the guest on an "imaginary" line (indicated by the upper red line) approximately 1/3 of the way down from the top of the screen. In addition, the shot is wide enough to allow space to add the name and title of the guest being interviewed. Notice that the guest is not looking at the camera but at the interviewer and there is slightly more room in "front" of the face in the direction the guest is looking. Use this shot at the beginning of the interview. 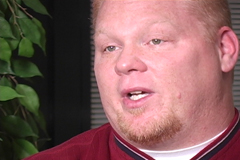 As in the previous medium shot, the medium close-up positions the eyes of the guest on the "imaginary" line approximately 1/3 of the way down from the top of the screen. Notice that there is slightly more room in "front" of face in the direction the guest is looking.

You can zoom-in to this shot anytime after the first question is answered but do any zooms while the interviewer is talking so that you're not zooming while the guest is talking unless you can perform a really, really smooth zoom.

If you want, you can zoom-in even tighter to a close-up shot but be careful to maintain the eyes on the third and be aware that the closer you get, the more the chance that the guest may move out of your shot unless you're prepared to pan to follow them if they sway back and forth.

Remind the guest that your words are not as important as theirs to what you are doing and ask them to repeat the question within their answer:

This will be very helpful in editing.

Listen! Be sure to really listen to what they are saying and respond accordingly. Ask follow-up questions if needed for clarity keeping in mind that the guest's answer needs to be a complete sentence. Incomplete sentences are difficult to use. If necessary, have the guest restate their answer to include the question ... See Q&A above.

In addition to the "talking head" video of the guest, you need to shoot "cover" video. Cover video can be used during the editing process to cover edits needed in the interview or to provide visual support for narration. Try to observe the following hints:

Why do you need cover shots?

This animation shows what happens if you try to edit out part of what the guest is saying without video to "cover the cut". The result is a "jump" in the position of the guest that is distracting.